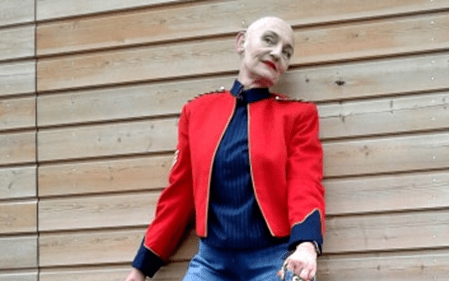 58-year-old Cathi Rae is a spoken word artist, or to the uninitiated: she writes brutally honest poetry, then has the guts to get up on stage and perform it in public. She is also achingly stylish, “all done on a shoestring”,  and has an Instagram profile that should have aspiring fashionistas lopping-off their selfie-taking arms in envy. After many years working with kids who were in danger of being excluded from school, she eventually opted to exclude herself, became a cleaner to pay the bills, and took a leap to follow her true calling.

I ask Cathi what she most hates about what she does, expecting talk of stage fright, or the horror of negative reviews.

“I don’t hate anything about it”, she says, sounding more than a little bemused by the question. “I’m a poet; so, I just do that. I have to do it. I’ve always written, I’m only truly me when I’m on stage performing my work, and I don’t particularly care if people like it, or even if they like me!  It doesn’t matter, because nobody expects to get rich or adored from being a still-breathing poet.”

She does admit to some frustration with the UK poetry scene though.

“Being significantly older than the standard-issue, bearded, young men who shriek political diatribes into the mic, or the legion of vulnerable young women who eviscerate themselves on stage is a massive advantage in terms of how thick-skinned I am. However, it does make it very difficult to get recognition or backing as an emerging voice. Bursaries and awards tend to be the preserve of the under thirties. There are occasional consolation prizes for people who have become poets in their dotage without literally dying on stage, but I’m not quite ancient enough to qualify for those yet!”

“I’m confounded by how you are supposed to hone your craft without the time to write every day, so how is anyone who still needs to earn a living supposed to get a break?”

Cathi has partially resolved this dilemma with her cleaning business, which allows her the flexibility to study for an MA in Creative Writing at Leicester University. “I started doing cleaning work because being made redundant in my fifties, and then panicking and taking the wrong role, had destroyed my confidence. I needed a job that would allow me to pay the bills but without the need to retrain.  When I was scrubbing other people’s bathrooms, I came to the realisation that I was probably too bright to be an eternal cleaner, so for my sanity, I decided to view myself as a poet who happened to bleach toilets too.”

Cathi secured her Uni place with an extensive portfolio of work, and an impressive CV of spoken word gigs and festival appearances. “I think they were too scared to turn me down, to be honest. I imagine they don’t often get some fifty-something cleaner, with a peroxide buzz cut and bright red lipstick, informing them that she intends to be a professional poet. Most of the other students are in their twenties and plan to write the definitive 21st Century novel. Me, I just want to write poems and perform them to anyone who wants to listen.”

I ask Cathi what advice she would offer her own twenty-year-old self, and she isn’t shy in her response. “Don’t do drugs, and living in a squat isn’t cool, so go and get a degree. The world is changing fast.”

Cathi Rae’s debut collection ‘Your Cleaner Hates You and Other Poems’ is published by Soulful Publishing, and is available in paperback at amazon.co.uk. Selected performances are online at youtube.com/channel/UCA2EgaUjZLxYir0PI77bNcQ

Delightful and delighted by these strange days

Loving every little scrap of lockdown

Embrace the rhythm of a dog day afternoon

Meals that last an hour or two

Naps because there’s not much else to do

It’s their job to jump with joy at doors

Tags:
Previous Article
OUT FOR A SPOT OF TEA – THE BEST AFTERNOON TEAS AROUND
Next Article
THE COURTYARD @ DUPORTH, CORNWALL

KAREN MOONEY IS A MATCH MADE IN HEAVEN
Ryan Beal June 3, 2020

KAREN MOONEY IS A MATCH MADE IN HEAVEN

Any cookies that may not be particularly necessary for the website to function and is used specifically to collect user personal data via analytics, ads, other embedded contents are termed as non-necessary cookies. It is mandatory to procure user consent prior to running these cookies on your website.